Before using this site please read the site disclaimer. Also please note that any links provided may be part of an affiliate programme (viz. eBay, Amazon) which helps support the site as I will earn a commission when visitors make a qualifying purchase.


Here's where a list of known-to-work alternatives to the monoshock Pro-link shock absorber will go. The shocks used on the various Honda CX/GL Pro-Link bikes aren't all the same, so what works for one model may not work as well for another. Also please note that just because one model year is listed as having worked for one person doesn't mean that another year will be the same - there's significant differences between some models and model years when it comes to shock lengths.

Which models are compatible?

First off - the GL500 shock has eyes on both ends, where the CX500EC Sports, CX500 Turbo, GL650 Silverwing, CX650ED and CX650 Turbo all have an eye on one end and a clevis on the other. Accordingly, you can't use a GL500 shock on any of the other models without modification and vice-versa.

Hagon make one - listed as being for both the CX500EC and CX650ED and Turbo - part number M61045. These shocks come quite highly regarded and claim to be fully rebuildable. The springs on this model of shock appear to be either red or black from the factory.

Other aftermarket shocks available for the CX650E, CX500E, GL650 etc. include YSS, Wilbers and Progressive.

Tony Deliseo has tried the YSS replacement shock - designed in the UK, made in Thailand. The unit is from their Z series and is fully serviceable, self-adjusting and has threaded preload and click rebound adjustment.

Next to the original 500E Sports unit:

The bushes are teflon-coated DU, the piston sintered and the shaft is a low-friction, heat treated hard chrome type.

Tony says that the ride is vastly better than the 30-year old shock, and according to someone else in his club who has owned one of these bikes from new it may even be better than the Pro-Link setup was when it was new. The part number Tony used is MZ456-290TRL-16 - I'm guessing that the 290 indicates the eye to eye length which should be 290mm. Find them on eBay AU, eBay UK, eBay US or eBay CA.

According to the YSS site the CX500E Sports or the Turbo's part number is MZ506-290TRL-16 - I'm looking into what the difference is. I presume the 290 indicates the length - which is the same between the two part numbers - but as far as the rest of it goes I don't know.

Thanks very much for the photos and information, Tony! 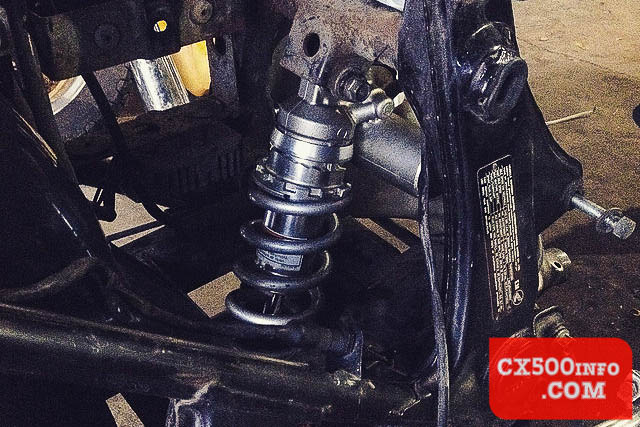 He says that it's a drop-in fit, just add washers and spacers. The reservoir does interfere with the coolant reservoir, though, so it means you need to move it to another location. You could flip it up the other way, but it would require cutting the frame. He also pointed out that the shock is designed for a lighter bike, so YMMV with the CX/GLs unless you have taken off some weight. Thanks Bryan!

He says that the bike sits a lot higher at the rear without a rider but is only about 10mm higher once a rider is seated on the bike, and that the ride is much stiffer. One bonus of the Fireblade shock is the remote reservoir, making it easier to manage the space requirements.

The CBR900RR Fireblade shock is 305mm in length and has 60mm in travel, both of which are ~10mm more than the GL500 stock shock. The red matches the Pro-Link sticker on the swingarm to boot, apparently!

Mike has used an XVS650 shock on his GL500 Interstate and says:

The upper shock mount on my bike needed to be shimmed with two washers to provide a tight fit for the upper shock collar, and the shock's two piece lower mount collar (total 55mm width) needed to be reduced to 49mm to fit in the lower shock mount. I had a local machine shop grind one of the two half length collars down by 6mm. The XVS 650 shock uses larger diameter mounting bolts which are too great a diameter to fit the GL500I mounts but, thankfully, the existing Honda upper and lower mounting bolts can be used since the torqued pro-link bolts hold the collars in place and the bushings rotate around the collars (therefore the narrower bolts in wider collars don't matter). I used Honda 77 Moly Grease to lubricate the bushings, which I understand to exceed the minimum 45% molybdenum disulfide content suggested by Honda. The XVS 650 eye-to-eye length was 11" compared to the GL500I 11.5" so the rear wheel is raised and the seat height is lowered, my guess about an inch or so. The bike has to be held a bit to the right to lower the side stand, but once lowered it holds the bike securely at a slight lean to the left (be wary). It takes a bit more effort to lift the bike onto the center stand but no more than my Gold Wing required. The adjustable shock is set at 4 and is fairly stiff.

In Aug 2019 Doug Shoffner sent in that he replaced his GL500 shock with one from a 2015 Suzuki Boulevard VZ800 (eBay US, eBay CA, eBay UK, eBay AU). He says it was an easy fit as the Suzuki shock was about 10mm narrower top and bottom - he used M10 washers as shims to compensate for the difference, re-using the original bolts. He says that the rear has been raised an inch and a half - so if you are using this shock make sure that you have not affected the rake/trail adversely and created a bike with unsafe handling characteristics.

Brennan Stroemer sent in this alternative:

He used a 2000 Honda CBR600 F4 rear shock absorber (eBay US, eBay AU), shimmed at the top with washers to center the shock. He says it has an adjustable valve for easy tuning, but that it does raise the rear of the bike 1.5" - so make sure that you are aware of the effect this will have on the bike's handling, as changing the rake and trail may produce a bike that handles in a dangerous fashion if done incorrectly.

Does anyone know of a used shock alternative for the CX650E, GL650 etc.? Let me know on the contact page if you do!

In 2019 the server has had to double in capacity to support the growing site... please consider dropping the site a donation to help cover the costs! Check out our Patreon for support options, buy a shirt, buy our apps, use my NordVPN affiliate link to sign up to their service or donate via Paypal: